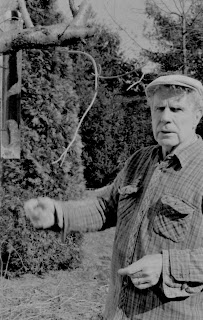 This past weekend the Riley family lovingly remembers the life and death of their father, my father-in-law Eric Ian Lawrence Riley. I was a young bride, married only three months when he passed from this world to the next. The night before his passing I was sleeping on the floor in a room with my husband and his younger brother. My father-in-law was downstairs in the family living room just above me, and as I laid there I could hear his breathing through the floor. He was fighting for every breath. It was an honor to be home with all of the family to take part in this sacred changing, to care for a man I had grown up with and grown to love, but it was also terrifying.  Death is like that I guess sacred yet terrifying, like a kind of birthing. My husband and I were out when my father-in-law breathed his last breath, we were out at the grocery store buying food for dinner. When we came home and found out that he was no longer with us I went to see him, holding his hand, looking at his shell.

I remember a conversation I had with my mother after the death of my own father. She was explaining that when someone dies its like a crab or a sea creature that busts out of its outer shell. Our bodies are like that shell, but our spirits live forever. Probably not the most theologically sound example but it seemed to make sense at the time. At a time when my four year old world was being turned upside down. My brother once asked me if I remembered Daddy, and to be honest I don't have many memories of my father. I do however, remember his funeral. I was standing in the front of our little church staring at his casket. It was a beautiful cherry wood I think, and it seemed to shine in the light. I tried to imagine my Father laying there, his shell laying there, wrapped in linen, like Jesus or Lazarus.

I've been thinking a lot about the passage in John 11 where Jesus brings Lazarus back from the dead. There seems to be two well known passages in this text. One that is often quoted during funerals...  “I am the resurrection and the life. Whoever believes in me, though he die, yet shall he live, and everyone who lives and believes in me shall never die."  The other famous verse from John 11 is the shortest, simply put "Jesus wept." However sandwiched in between those two verses is one that I keep coming back to... "When Jesus saw her weeping, and the Jews who had come with her also weeping, he was deeply moved in his spirit and greatly troubled." In my ESV bible commentary its states that the phrase "deeply moved" means that Jesus was outraged, not just that Lazarus was dead, but outraged at death itself. Jesus was outraged over death itself... and very soon after this, he himself dies, and shortly after that, he has victory over death.

When I was diagnosed with breast cancer one of the first questions I asked was how long was I going to live. Throughout the last few months I have at times thought about my own death, but at some point a few weeks ago I stopped thinking about death. I wanted to be focusing on living. Only recently in the last few days have I begun to rethink on this subject. Not that I feel I'm going to die anytime soon (unless the Lord so wills it) but I sense the Lord nudging me in this direction out of a love for me, to remind me that death is not something to be afraid of. To be outraged by disease and death, yes! but to be terrified and to live my life out of that terror, no.

A few years back I felt drawn to this verse in Matthew 10:39 "Whoever finds his life will lose it, and whoever loses his life for my sake will find it." Strangely enough, going through this journey of cancer, I have found myself by giving up control of my life. Before this, I was holding on so tightly to my life and the lives of my family members that I was loosing the joy of living. I was afraid that without warning death would come knocking at my door again. Now I am looking face to face at my fear and the only thing I hear is this.... "Death is swallowed up in victory. O death, where is your victory? O death, where is your sting?” But it doesn't stop there! Oh no, if you read on to the rest of the chapter there is this lovely explanation and call. "The sting of death is sin, and the power of sin is the law. But thanks be to God, who gives us the victory through our Lord Jesus Christ. Therefore, my beloved brothers, be steadfast, immovable, always abounding in the work of the Lord, knowing that in the Lord your labor is not in vain 1 Cor. 15." And so from death comes life, a life that is abounding. May we all live such lives, knowing that we labor not in vain! Amen.